If one looks at archives of anarchist publications throughout history, one can find an enormous amount of cultural material such as short stories, poetry, and visual art. These materials were of great importance to past movements because they were often times more accessible to the average worker than theoretical or historical texts. Furthermore, these artistic expressions could evoke powerful emotional responses and tackle abstract concepts, both important aspects of building a culture of resistance. These cultural materials continue to be valuable for us today. They are historical artifacts that provide a window into the past, and they are cultural tools that can be used to reach out and inspire.

With this in mind, one of the projects we have undertaken is the reproduction of images found in anarchist publications, with a specific focus on woodblock prints. We hope that by re-printing these materials and paying special attention to the original processes used, we can resurrect these forgotten images and preserve an important artistic tradition. Most of the images found in these anarchist publications are copyright-free, and many of these prints were often re-used in different periodicals. Here is an example of one of the images we are working with: 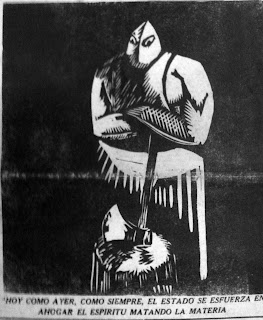 This image originally appeared on the front cover of La Protesta on May 1st, 1927. Originally called La Protesta Humana, this anarchist publication was founded on June 13, 1887. The name was later simplified to La Protesta on November 7, 1903 to make it easier for street vendors to announce. La Protesta represented mostly anarcho-syndicalist, organizationalist views and was specifically opposed to terrorism as a tactic. Throughout its history, this newspaper was physically assaulted and banned several times. For example, on May 13, 1910 it was banned for two years. In response to this, starting on May 15, 1911, La Protesta was edited in Montevideo, Uruguay and brought illegally to Buenos Aires. It wasn’t until July 20, 1913 that this newspaper would start printing in Buenos Aires once again. Later, on January 10, 1919, amidst a general strike, the police alongside a nationalist paramilitary force known as the “Patriotic League” assaulted La Protesta and suspended publications for eleven days. In this way, printing of La Protesta suffered countless interruptions. However, despite constant repression by the State, the newspaper continues to be published to the present day and is Argentina’s longest running anarchist publication.

The image shown here, printed on anniversary of the Haymarket affair, accompanied an article that reflected on the fight for an eight-hour workday in the United States and criticized the violent and unjust response of the State: “The 1st of May is a day of remembrance and protest. For the workers, this day not only symbolizes the judicial crime in Chicago, but also all of the crimes of the law and all of the violent acts of the State.” Such recognition demonstrates the transnational nature of the anarchist movement. In addition to this, from the Argentine perspective the Haymarket massacre shows the hypocrisy of a country that claims to value freedom above all else, and La Protesta uses this to critique the violent nature of the State.

Below the image itself, the caption reads, “Today, like yesterday, like always, the State makes an effort to drown the spirit, killing the subject matter.” The executioner stares through the page, axe in hand, reminding workers around the world, that even in a so-called democracy like the United States, governments protect the interests of capital with unjust violence.

Posted by Mselasco at 7:45 AM No comments: 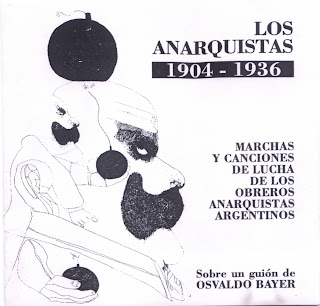 Posted by Mselasco at 9:37 PM No comments: